note: This article first appeared in May 2015.You should read Part #1 that appeared yesterday.

In Part #1 of this series I covered the mission of this Ham-In-The-Box project, requirements and limitations, and the initial challenges that I faced. I also outlined each piece of equipment that would make up the final product. In this article I will cover a step-by-step build process along with tips that I discovered along the way.

Just a reminder of the mission of this project –

To be able to rapidly field deploy a Ham radio, for which I am licensed to use, in the event of any emergency while maintaining a secure and protective storage environment. 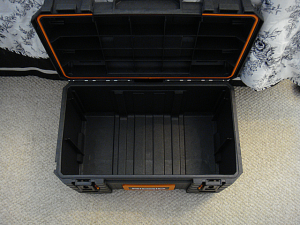 I quickly realized how inconvenient working on the box would be with the box lid in place. So the first thing I did was take the lid off. To take the lid off get a punch and tap the hinge rod out from the inside out. Once you have about 1/2” of the rod exposed then grasp the rod with a pair of vice grips and pull it the rest of the way out of the hinge. 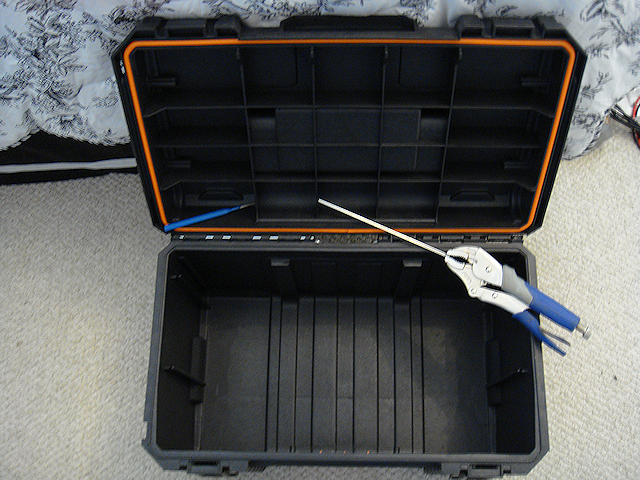 Next, I laid out the components to ensure they would all fit and be accessible as needed. The PWRgate warned about heat being generated by the unit so I decided to install it off to one side where I could install a cooling fan to blow air directly onto its heat sink. I had to implement a “remote head” installation of the Yaesu FT-8900R due to its overall size. If I didn’t the head would be too close to the lid when closed and I didn’t want to take the chance to damage it. It worked out great since it looks like a much cleaner install. I also took care to install the radio as far away from the heat generating PWRgate to avoid over heating the radio.

I laid out the first level of structural material (framing). I cut the upright 1-1/4” angle iron (aluminum) to fit very snugly into the box. The corners of the aluminum actually bite into the plastic. Once I had the uprights cut to length and placed in the box I then placed the lower cross-member into position based on securing the AC power supply that would be placed at the “bottom” of the unit when the box was placed on its side during operation. That was due to the power supply’s weight; it was the heaviest item that would go into the box. 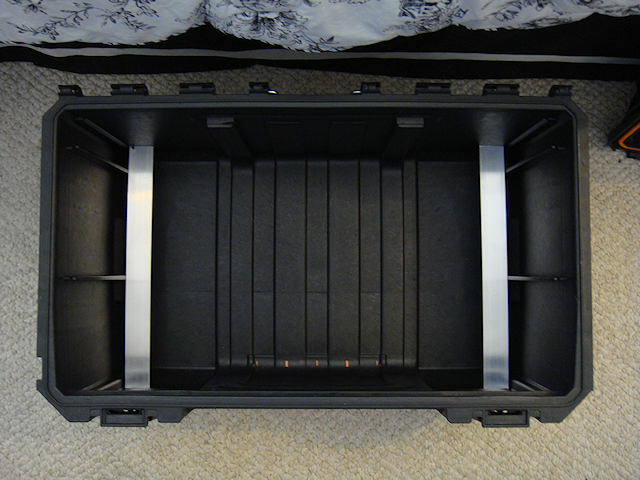 Next came placing the radio. I based the top cross-member’s position based on the radio unit’s size; I wanted the radio to be up and out of the way. I also wanted the rear of the radio to facing outward for access to the power cable, data port and antenna coupling. That positioning also allows for the fan to move the unit’s heated air to the outside of the box.

To mount the PWRgate I used a short piece of 1-1/4” angle aluminum to mount the PWRgate to. I used #8 bolts with wingnuts and washers. I had already marked and drilled holes to match mounting the PWRgate mounting bracket to the cross-member. If I have to remove the PWRgate unit it won’t be easy. The left-hand wingnut it tough to reach with my big hands and fingers but it can be done. Trying to remove the bolts and nuts from the units mounting bracket would have been impossible since the unit itself prevents access to the bolts/nuts mounting the bracket to the cross-member. 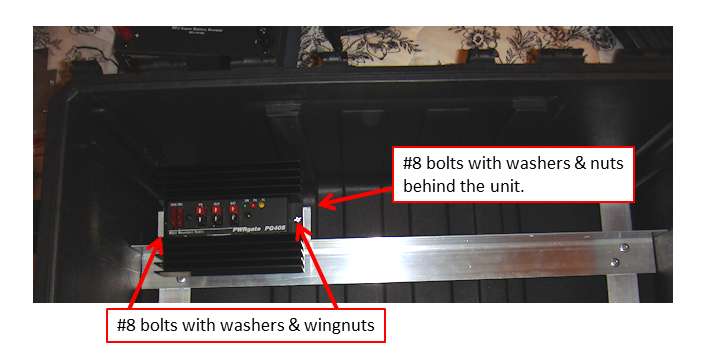 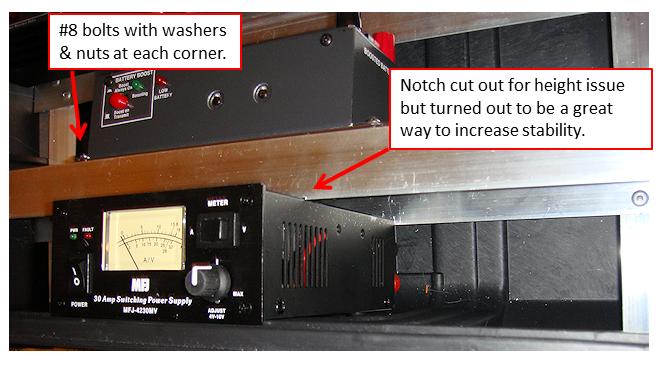 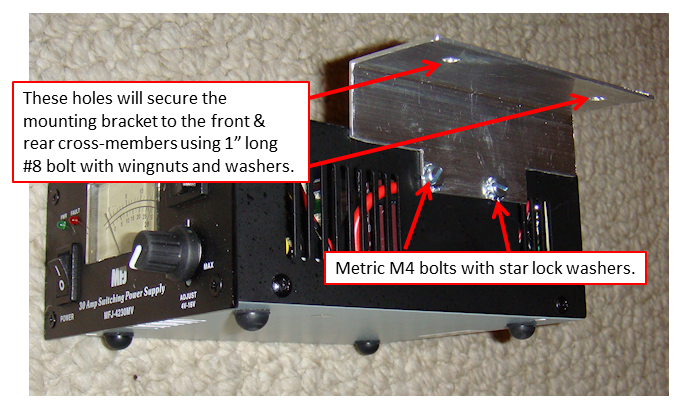 connection (SO-239) on the rear of the unit. The “remote” outlet is back there as well but I don’t intend on using that option. I did have to ensure that I could see the booster unit’s LED lights and have access to the button on the front panel of the unit. I also had to give consideration to connections on the top of the unit. All-in-all the placement was near-perfect.

While I tightened down the bolts on the PWRgate mounting bracket, I left the bolts loose on the AC power supply bracket and cross members to facilitate mounting the battery booster. 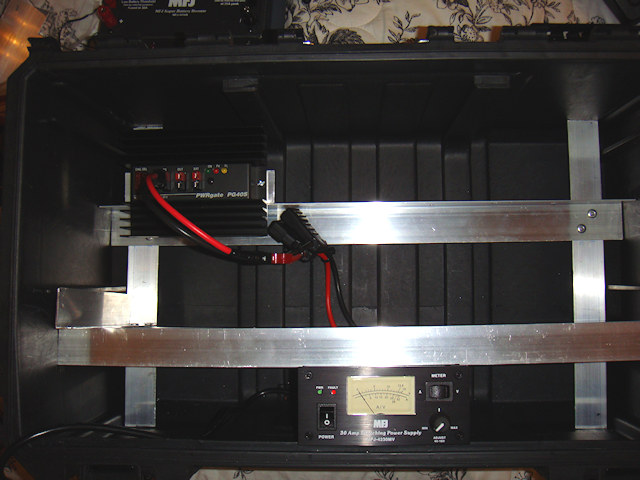 I placed a 90° SO-239 connector on the radio antenna to reduce the radical bend in the antenna lead that would connect the radio to the battery booster. Remember the battery booster has a RF sampling port that enables the booster to only boost the battery when the radio is actually transmitting. Receiving doesn’t require or need any boost in battery power. 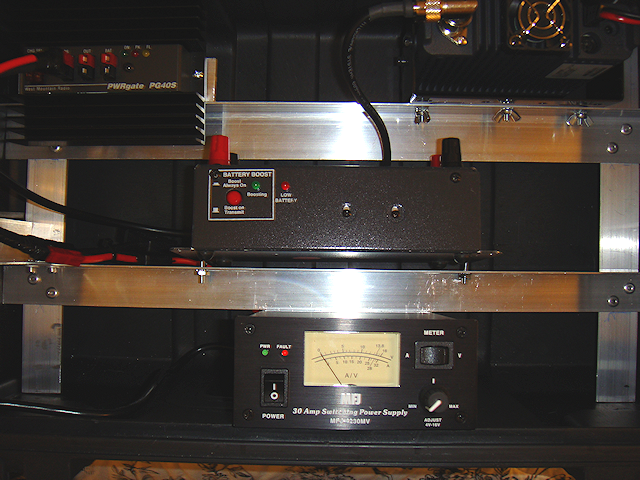 I also had to make a custom remote head extension cable. It is a 6-wire cable with an RJ connector. I could have bought a cable but making the right length on the spot was easier and cheaper. The cable has to reach from the rear of the radio unit to the remote head.

One of the easiest parts of this build was installing the remote head mounting bracket. I wanted it fairly low in relationship to my eyes & head. Looking slightly down at a small display screen and buttons is much preferred to looking straight ahead or elevated. I used two self-tapping, self-drilling sheet metal screws with hex heads.

I was going to complete my “build” post today but while diagramming my wire layout I found a flaw and had to do a little re-engineering. Not to worry though, it is coming along just fine, a minor tweak is all. So I will post this part of the build, finish up with Part #3 being the front panel, the wiring, and the antenna.