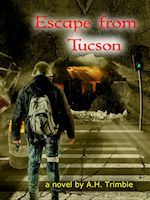 Ever hear people talk about watching train wrecks? Or NASCAR wrecks? You know what is going to happen, you know it is going to be bad, and you just can’t turn your head away…you have to watch. Yeah, that was me last night.

Yes, I did take a bath. It felt great…really great. The water was just a bit cold when I got in, but it cooled my body temp down a bit and it felt wonderful. I felt invigorated when I started walking after I air dried. Yeah, you don’t want that visual do you…a 61-year old naked man air drying. Fortunately it doesn’t take too long when it is like 2% humidity and 100degrees.

I made great time and was feeling good about it. And I just had to see what was happening at the casino and trading post. Simple answer…nothing. Why? It was burned to the ground.

Now comes the train wreck part. I had to go look at the burned out buildings. Yeah, had to. The trading post was no big deal, just burned down. The casino was a different story. From what I can tell, I didn’t get real close, the place had been full of people when it burned down. And I don’t think it burned quick or hot. I could easily recognize a whole bunch of charred bodies. Some had been…ah, scavenged pretty badly. I am sure there is a story to what happened there but I have no clue why all those people (or bodies) got burned up in there. And honestly, I don’t think I want to know. I walked on as quickly as I could.

The good news is I walked 19 miles last night. I did the math and I averaged over two miles per hour. I don’t know if it was the bath that invigorated me or I wanted to get away from the funeral pyre. I would like to think it is because I am getting close to home.

Last night I kept thinking about home a lot. What I would find, how bad it might be, even if Lisa was still there and alive let alone uninjured. After everything I’ve seen I am worried more now than ever.

It appears that society has completely broken down all the old morals and standards. It has remade itself into tribalism…and survival of the fittest tribe. It doesn’t appear that people are working together to make things better for everyone. It is just now all about the tribe surviving at the expense of anyone and everyone else. And that makes life very, very problematic. If you belong to the wrong tribe, they crush you under some kind of tribal law. You join a weak tribe and you get crushed by a strong tribe. You join a small tribe and the small number of people don’t have enough skills to survive…like medical people or good shooters.

Have we reverted to the caveman days? Is that we have become?

The Three Rivers Ranch folks seemed to have it figured out the best. And Hansen will love to hear that they were all Mormons. They were some of the most generous and kind folks I’ve ever met…pre- or post-event. Jim would say it is their faith and religion that makes them that way. I’m not sure, maybe they are just good people that had good parents.

Don’t get me wrong…I liked hearing about their strong belief in Christ, it made sense to me. And they were all about family…how can that be a bad thing. Like I said before, they are one of the most praying group of people I’ve heard about or been around. And every single prayer was mostly about being grateful. Then number two prayer priority was asking for blessings on other people. They have to be some of the most selfless people I’ve run across.

Funny, the patriarch told me I needed to get baptized. Yeah, I wasn’t sure about all of that. Too much I don’t know, too much in my past, and I would never do anything like that without talking to Lisa first.

What really touched my heart was talking to Ashley the night before I left. After dinner she asked me to walk outside with her. Really? Tell me again how old that kid is!

We sat down on this swing under a cottonwood tree that is one of eight trees around their stock pond. She didn’t say anything for maybe a minute or two…then she busted out crying and hugged me around my neck for maybe ten minutes…crying the whole time…huge, heaving sobs.

When she was done she said thank you, then got quiet again. Not long after that she started talking about family, about temple marriage, about eternal salvation. She said she knew all these things were true. Now, don’t get me wrong, she wasn’t some preacher, but just this little kid talking about it the best she could. But the things she said were amazing…I just thought how cool it was for a kid this young to know so much and be able to talk about it. She said it was all important to me, every bit of it.

I asked her where she learned about all of this and she said in Primary and at Family Home Evenings with her mom and dad. I figured out Primary must be like Sunday School for kids or something. She got quiet for a few minutes after mentioning her mom and dad.

A couple minutes later she turned to me and looked me straight in the eye. I could have sworn I was looking at some 45-year old grown woman at that point. She told me that God lives that Jesus is the Christ and he died for our sins. She said that we have a living Prophet on the earth today. She said God loves me. Then just as fast, she went back to being a little kind again, climbed up on my lap, put her arms around my neck, and just laid up against me for the longest time. It was the happiest and most content I’ve been in years. I felt a love come over me sitting on that swing with that little girl…I can’t even begin to know how to explain that feeling. Pure, blissful, relaxing peace.

Maybe a half hour later she got down and told me she was going in the house but before she went in she wanted me to know he loved me and that I needed to love him. I asked her “Who?” She looked at me and said, “Heavenly Father. He loves you and he wants you to love him.” The she just turned and headed to the house.

As she was walking away I asked her, “How do you know that?”

She stopped, turned, smiled, as innocent as I’ve ever heard anyone said, “He told me. Oh, and Lisa is fine and is waiting for you.”

She was headed back to the house and I started to cry. I have no idea why I was crying, it just came over me, I don’t know what “it” was but I could feel it.

Nathan walked out of the shadows as I was drying my eyes. He quietly told me, “Don’t be embarrassed, she’s been like that for a couple of years now. She can melt a grown man down when she talks like that. Something comes over her. It’s a gift.”

“So how long you been hiding in the shadows?”

“Ever since she left the house. You don’t think we are going to let a little kid just walk outside at night alone…let alone with someone who is not part of the family?”

“Guess not,” was all I could say. I was still pretty overcome by whatever just happened with that special little girl.

“Then again, after all of that…you probably are a family member now,” he shook my hand, then bro-hugged me. “Welcome to the family! I’ll tell the others our family just grew by one. They’ll understand. Good night.” He was grinning ear-to-ear as he headed to the house.

Are all those Tanner kids special? I will cherish that time at the ranch for the rest of my life. But, I get the idea in my heart, not in my head, that I will see them again. At least some of them.

I will miss that little blonde headed, precocious turd!