I’ve got a lot of knives…I mean a lot of knives. I also like them sharp…I mean really sharp. I have been using a Smith’s diamond stone and I am pleased with it. I actually like the coarse side a lot better than the fine side. I know it may sound crazy but it feels as if it puts a bunch of micro-serrations on the blade which makes cutting easier. But, that is not the object of this review…The Work Sharp system is. And I am going to post more than my usual number of pictures to give you a flavor of what this puppy can really do.

I was going through a lot of testing of knives a few months back and I was getting really tired of hand sharpening every knife every time I completed a test. So I started doing some research and found the Work Sharp system. Boy, am I glad I did!

And don’t worry about changing belts…it is easy and fast. I can 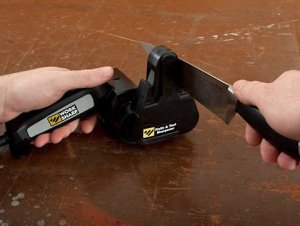 change a belt in under a minute. And belts last a pretty dang long time, even when doing heavy duty sharpening. But the heavier the use, the quicker the belt gets used up. One thing you will want to do is buy extra belts. Several of each kind of belt comes in the box but you will want more on-hand just in case the supply might dry up. 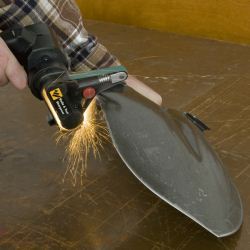 Bottom line…this gadget is a real time-saver and worth every dime I paid for it. I can sharpen 20 knives easily in an hour. This is a “Buy!”

Note #1 – Send in your warranty card, they will send you some new belts. 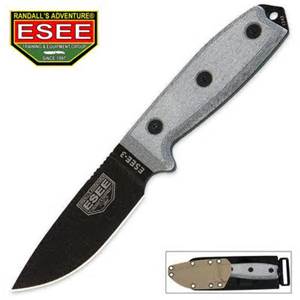 There are times when you know you have a quality knife in your hands. The ESEE-3 is one of those knives…there is absolutely no doubt about it.

I previously reviewed the ESEE-6 (8/4/2019) and found it to be an amazing knife. The ESEE-3 is no less a knife, it is amazing. You pick up the knife and it immediately “feels” right in your hand. The balance is perfect, the handle is sized right, it just fits.

The 1095 carbon steel is amazingly hard and maintains an edge really well. And just as importantly it takes an edge just as easily. I use a diamond stone and found it to be really easy to touch up a razor sharp edge to the knife. The blade is a full-tang and has a zero tolerance in mating with the handle material. It is matched perfectly to the handle.

The knife truly excels in being a survival knife, easily concealed, and obviously completely capable of withstanding the rough environment of survival. During testing I pounded on my ESEE knife to split wood. The outcome was just fine!

However, admittedly it is a little weak in the area of self-defense. Ironically, the same traits that make it a great survival knife also limit it from excelling as a self-defense knife. It takes a lot of pressure to push that knife blade directly into meat. Slashing/cutting into meat is not a problem.

Let me touch on a few technical specifications first…

There are different models to the ESEE-3…

Let me make this perfectly clear…BUY THE KNIFE !

OK, that being cleared up let me address the survival vs. defense comment earlier. To qualify as a great survival knife you want a thick, heavy, sturdy blade. A self-defense knife warrants a razor sharp edged knife that can also penetrate easily. That style blade not be compatible with survival demands.

However, the ESEE-3 does perform adequately when employed as a self-defense knife other than easy

penetration into meat. While it might not penetrate as well as a RAT Headhunter, it will get the job done. But the overwhelming quality of its survival traits dwarf any self-defense limitations.

Now here is a bonus…my wife loves her ESEE-3!

When we were looking for our camping/survival knives she liked my ESEE-6 but felt it was too large and too heavy for her. She wanted something more “lady-like” to use. Well OK then! If my wife wants a knife, she gets a knife!

Yup, I am a blessed man!

This is near a perfect piece of gear/equipment as you are going to find in the prepper world. They are not expensive compared to other quality knives. But then again, what is your family’s life worth?

That means spend the money and get this quality knife, you will be glad you did!

I have always loved knives. The fascination began when I was in Scouting and I learned how to safely handle and use a knife in the outdoors. The love affair began when I was in the navy and we had to have a quality knife for our work on deck; our life could well depend on it. My knife of choice then was a folding Buck knife; I think it was a Buck 110 Hunter. But times change and so do needs.  Hence, the knife of choice changed as well.

What I was looking for as I began my search for a knife:

• A dependable survival knife that could be used tactically if needed.
• Very high quality knife that you could bet your life on and win.
• High carbon steel, not stainless steel.
• Easy to sharpen and holds an edge well.
• Sturdy enough to chop on a 3” tree or handy enough sharpen a spear tip.
• Skin an animal or cut through bone.
• A virtually indestructible handle that could be replaced if needed.
• A full tang blade with a handle end (pummel) that could be used as a hammer.
• Partial serration to assist with cutting through thick items.
• A company that offers an “unconditional warranty”.

I researched a whole lot of survival websites and some military related websites. I asked a knife collecting buddy, a hunter buddy, and a survival expert buddy what they thought. As I boiled down my search the name RAT, designed by Jeff Randall and sold by Rat Cutlery, kept rising to the surface. The second knife that got good press was a RAT knife by Ontario Cutlery; also designed by Jeff Randall.

Just to clarify the RAT stands for Randall’s Adventure and Training. Jeff Randall is pretty well known trainer/instructor for jungle survival. He even trains Special Forces, foreign and domestic. The manufacturing is done by Rowan Manufacturing located in Idaho Falls, Idaho. 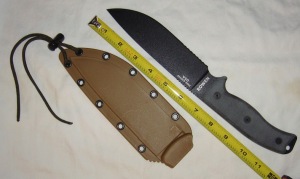 Back to the knife…Technical specifications of my ESEE-6:

Why did I want a knife so large (6”)?  Well, I would have preferred a 4” blade but I bought that size for my wife. Since we are a team I figured we could use a knife that was a bit longer for larger heavier work; so the 6” fit that bill quite nicely. That would give us two solid sizes to cover most survival situational needs.

I ordered my knife (and my wife’s) on a Saturday and it arrived on Thursday straight from eseeknives.com. My first impression was speedy handling and shipping. When I took it out of the box and then out of the plastic wrapper and sheath I wasn’t disappointed. “Solid quality” was my initial impression when I grasped the handle. It just felt very good in my hand, a natural fit. The more I looked at this knife the more I liked it and the better it felt. That led to confidence in it without even having tried it on anything.

As any man would do – I then touched the sharpened blade edge. Yes, it was very sharp right out of the box. No, I didn’t need stitches, an ambulance, or even a band aid. As I looked over the blade I appreciated the textured powder coating that is flat black in color. I am not a “shinny” blade kind of guy; reflections and such are not my cup of tea. The powder coating is applied in such a manner that it resists corrosion and chipping more than the normal powder coating process. And, it is a smooth texture coating, not rough.

I wasn’t crazy about the sheath at first. It is plastic and feels cheap. There was no inherent way to attach the sheath to anything. However I was willing to give them the benefit of the doubt. I read the instructions and tried various options for carrying. When all was said and done I am still not crazy about the sheath but not for the obvious reason of it being made out of plastic. 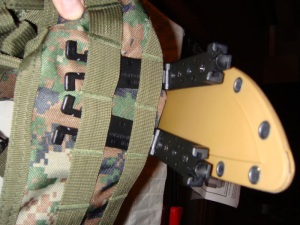 The primary drawback to the sheath is its complete inability to attach to MOLLE gear.  Even with the MOLLE locks that are supplied with the knife & sheath it’s still a pain. I will have to find an alternative. But I would not return the knife or cancel a purchase based on the sheath. I tried a number of carry options with the knife and overall I am impressed and pleased with the earlier exception with MOLLE gear. The following pictures show different options that do work. 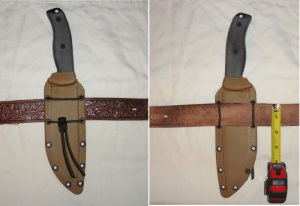 The sheath and lanyard does give a couple basic carry options; the standard vertical carry and the horizontal carry. For those of you that might not recognize a horizontal carry it is sometimes used to carry the knife in the small of the back mounted with the knife handle in the direction of your strong side (i.e. if you are right handed the handle is to the right of your

back).  I was surprised at how well the knife stayed in place while mounted in either position. But, we will see how it holds up to field testing for a good carry system.

I am always thinking about “worst case scenario”. So naturally I tried out the sheath to see how I could add some other functionality to it. I ended up adding 12’ of 550 paracord to the sheath rather easily. Had I taken the time to do a proper wrap I probably could have gotten 15’ or so on it. You never know when you might need 550 paracord. I love the stuff. I also used the desert camo pattern 550 paracord and it did a great job of breaking up the stark outline and color of the sheath.

Overall – I am very pleased with my new knife, it is solid, well styled, and an impressive design. So far I am glad that I spent the money for a high end knife.  I will test it out camping and finish the review.

2 – weeks later:  OK, we spent the weekend up on the Gila National Forest, right on the edge of the wilderness area. We tried a bunch of our gear out, including our new ESEE knives. I tried to figure out the wording for conveying exactly how I feel about my 6″ ESEE.

So I summed it up with one word…WOW !

The knife did everything I asked it to do and then way more. Let’s see – I used it to split 2″ x 6″ wood (using a piece of wood like a mallet on the blade to drive it through the 2×6), I used it to shave very fine slivers of wood, I used it to cut meat, to saw with and to chop with. It performed better than any knife I have ever owned. I did not use it to skin anything on this trip. I would probably use DW’s ESEE-4 for that task.

The knife felt right at home in my hand, comfortable grip, solid, and hefty enough to do tactical work I am sure.

Just to push the envelope a bit I pried apart 2 pieces of wood that had been nailed together. I used a twisting motion on the blade between the wood.  No problems, very solid, no strain on the blade tip. Then one more interesting note, while splitting some wood I brought with us I accidentally went through a finishing nail. The knife went right on through like it wasn’t even there. The knife is very easy to sharpen and holds an edge extremely well.