This is one of a series of posts on some commonly held prepping beliefs, and reasons why they may be wrong and possibly dangerous to you and your loved ones. 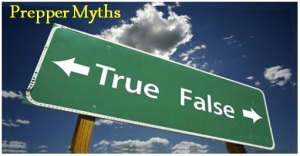 Note: Myths 5 – 10 were taken from a post by a so-called prepper expert providing advice while dispelling “myths” about prepping and bugging out. I thought the advice to be so outrageously idiotic and dangerous that I felt the need to respond to this guy before he gets people killed.

Their Myth Reasoning (not me talking/writing) – This is the other camp that says they won’t ever bug out and don’t need a bug out plan.  As I mentioned above, in the vast majority of scenarios, staying home or “bugging in” is a better solution. To me, this means that the events you do need to bug out for are much more serious. Events that could push me from my home are things like imminent fire, flooding, a prolonged grid down or civil unrest in an urban and some suburban areas. When do you know you should bug out? When you would be safer leaving than staying. The events I described could be extremely dangerous, so not having a plan to put in action, having BOB’s and a plan for bugging out, is equally as dangerous.

My Opinion –  Once again, I kind of agree but the logic and reasoning but the advice falls short. The writer talks about some events that would push him from his home. But he gives no rationale behind his decision. Nor, does he give you any advice on how to apply it to your situation. His advice to go is “When you would be safer leaving than staying.”

What? How is that for sound reasoning? What do you base the answer on? Do you wait until some magical answer appears to you?

I say, make these decisions ahead of time. Identify the events, situations, or scenarios that would drive you to bug-out. Set trigger points and steps to take at each trigger point so when you are in a full-on panic mode you can still know what to do and when. In so doing, when you are at the most crucial decision point your level-headed decisions are already made for you. It is called “planning.” And those of us that have worked in high-stress, emergency, disaster, and stressful lines of work know that the worst possible time to do planning and making complex decisions is when the pressure is at its highest.

Go through a threat and risk assessment of those events that you have decided will likely affect your family. <read more> Then work through the “probability and severity” aspect of each threat. Then based on that you can design a plan to mitigate the threats and risks in logical and reasonable approach. You can take it one step at a time addressing the most urgent threat first.

So, yes, I agree with the writer on having a plan. But I feel his logic, reasoning and advice is flawed to the point it could jeopardize the safety of you and your family.