This a very focused SitRep today…I almost made it an Immediate Action Warning but decided against that move. Reason? No specific action to be taken. Well, almost none. I will explain more in the Summary. This will be a very narrowly focused SitRep.

We all heard about Rhode Island and Delaware state troopers pulling over out-of-state drivers in regards to violations of COVID-19 Executive Orders. We’ve seen that Pennsylvania troopers are issuing tickets for stay-at-home violations. And of course California is simply off the charts for their enforcement actions. But it is now growing exponentially worse…

Grisham comes from a strong political family dynasty in New Mexico. Her family has been running New Mexico in one form or another for generations. Grisham herself is a strong abortion supporter, a radical environmentalist, and anti-gun extremist. She was also caught in the Azerbaijan scandal shortly after her election to Congress. She was caught accepting travel funding, money, and gifts from the radical Muslim authoritarian government of Azerbaijan.

Grisham’s EOs went far beyond any Constitutional authority she actually has. First she shut down gun shops…not to control the spread of COVID-19, but to stop guns going into the hands of those that were worried about the potential of coming violence…those who wished to protect their families. Her state troopers literally forced the closure of gun shops. Next she forced general merchandise stores to rope off areas of their stores that sold “non-essential” goods. Then this past week her state trooper thugs showed up at farm and ranch supply stores and ordered them closed as well. The store employees and owners were threatened with arrest if they refused to comply with the demands of law enforcement.

Kentucky: Last week the leftist Governor of Kentucky ordered church’s to cease and desist, stopping church members from meeting together. The C&D Order was given just before Easter to stop Christians from celebrating Easter.

Now, you might think it is coincidental…it’s not. Andy Beshear (63st Governor of Kentucky) is the son of Steve Beshear (61st Governor of Kentucky). Steve Beshear is a rabid anti-Christian and proved that while he was Attorney General of Kentucky. He started his campaign against Christians almost immediately after his election as Attorney General of Kentucky decades ago. One of his first attacks was forcing the removal of the Ten Commandments from public schools. Back to the current Governor, his son Andy. After Andy was elected Attorney General of Kentucky he immediately began attacking the then republican governor in the court system…using public taxpayer funds to unseat his political rival. So we have an autocratic political family, who have proven themselves to be anti-Christians, using taxpayer money for their own personal benefit, actually attacking Christians…and the Constitution’s Freedom of Religion!

“Attack”…how? Not only did Andy issue the EO banning Christians from meeting, he ordered his jack-booted state

troopers to conduct surveillance operations of churches on Easter Sunday. They were to record license plate information, use that information to obtain names and addresses of the vehicle owners, and turn that information over to the State Health Department. Then the health department personnel will contact each person and issue a 14-day quarantine order. This was all verified by Breitbart news. And it actually happened according to USA Today!  Not only that, there were nails, tacks, and screws found at church parking lot entrances. Did the cops do that? Probably not. But, the Governor’s influence and anti-Christian attacks against Christians and churches sure motivated someone to attack Christians.

Michigan: Michigan is one of those states that is an oxymoron. On one hand it is an extremely liberal/progressive 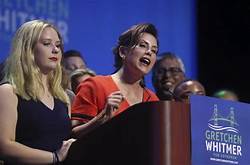 state. But, then you have a sizable militia presence as well…and they are not on the political left to be sure. So who is the Governor of Michigan who issued the extremely strict authoritarian stay-at-home order? Governor Gretchen Whitmer who is a strong abortion advocate, rabid anti-Trumper, and huge tax advocate. And yet another member of a very strong state political family dynasty…an autocrat.

organized by rights advocates in opposition to her authoritarianism. Of particular note brought up by the protest organizers…”heart surgeries are banned as non-essential, but abortion clinics remain open” and Easter was cancelled by the Governor of Michigan. What was the Governor’s reaction to the protest…she threatened even stronger enforcement of existing orders…and imposing new, even stronger orders restricting citizens travel/movement and right to assemble. Now that is a perfect, to the letter perfect, example of a dictatorial leader.

We have all heard the nightmare stories from the leftist states along the east and west coasts. Those radical authoritarian steps taken to shut down rights, liberties, and freedoms of those states’ citizens. But, we are seeing more and more of those actions taking place…even in the mid-west. In every instance of these radical Draconian measures that I have investigated, I’ve seen that those politicians behind the orders are radical leftists. And I mean the most radical of these left-wing extremists and/or Progressives. They are drunk with their own power…and now it is turning oh so obvious what they are doing and it is showing signs of the beginning of violence…politically motivated violence.

food supply chain shortages, vegetable seed shortages, manufacturing grinding to a halt, and the largest transfer of wealth in the history of this country. And you have to ask yourself…How much

longer till the explosion happens?

And when/if that explosions takes place it will be unrealistic in every sense of the word! And it is getting closer every single day. And that isn’t happening by accident. Political and other subversive power-players are moving us ever closer to the “explosion” by plan and design. Why?

When there is fear, panic, violence, unrest, and massive threats of every kind…people will DEMAND that it be

stopped, fixed, eliminated. And government will be all too happy to oblige…and they will “fix” it. But the cure, or fix, will be kill any last vestiges of the Constitution, rights, liberties, freedoms, or the hope of any. The governments’ cure for what is developing will be authoritarianism. And that will lead to totalitarianism.

Back on 4/11 in my SitRep I spoke of the economy crashing in 4 – 12 weeks. I still hold that to be the probable case. Now I am seeing a better than 50/50 chance of our Constitutional Republic crashing, in conjunction with or independent of the economic crash. And that crash could occur within 3 – 9 months. Yes, I just said we could well see the destruction of the United States as we know it within 3 – 9 months…the probability is now better than 50/50!

What can you do?

Go back and read the articles, especially the previous SitReps, I lay out exactly what to do. Actually, this entire site is designed for, and all the articles written for, just such grid-down events. It is up to you to educate yourself or not. I suggest you do…and then plan accordingly.

What should you plan to do? The short answer is…the GOAL should be to survive and thrive. How you do that is entirely up to you…your PLAN.

Each person, each family, each congregation, each community is different…so should the plan be different. But, I suggest you get started…quickly.