Early this morning a man was arrested with weapons and entry tools in close proximity to Supreme Court Justice Kavanaugh’s home. He stated he was “incensed” at Kavanaugh’s assumed support of overturning Roe v. Wade. The man who has not yet been identified was apparently a resident of the radical left-wing state of California.

The armed man holds radical pro-abortion beliefs and was taken into custody in suburban Montgomery County, MD as he approached the immediate neighborhood of Justice Kavanaugh. He reportedly told police he wanted to kill Justice Kavanaugh and/or his family.

However, this is only 1/2 of the plot to murder Justice Kavanaugh.

In early March of this year Democrats’ Senate leader, Chuck Schumer, called for violence against

Justice Kavanaugh. In front of a mob Schumer continued to increase tensions and urged those in the mob to commit violence to the point that “I want to tell you, Kavanaugh. You have released the whirlwind and you will pay the price. You won’t know what hit you!”

It is unknown if the man attempting to assassinate Justice Kavanaugh was in the mob being incited by Schumer. 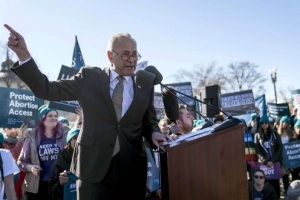 It is also unknown if the assassin at anytime met with Schumer or any of Schumer’s staff. What is clearly known…the man acted in accordance with Schumer’s encouragement and direction.

At this time no charges are expected to be filed against Schumer or any of his staff in the plot to assassinate Justice Kavanaugh.

As I have been warning about for a very long time…the radical left, at the direction of the authoritarians, have been very violent and will continue to hatch plots of more violence, murders, and assassinations. Their intent is to create chaos, confusion, and enough violence and fear that US citizens will cry out for “safety & peace” and “law & order.” This will allow the authoritarians to implement even more eliminations of rights, freedoms, and liberties of US citizens.

I encourage you to be prepared to defend yourself, your family, your home, your community, and your congregations. But, do not be part of any militia or take part in any demonstration/protests/rallies, etc. Said participation could quickly turn to a point were violence erupts and you are caught up in the violence, or brought into a situation where you are wrongly found to be part of instigating the violence.

Do not be overly alarmed at this attempted assassination attempt. This is all part of the

authoritarians’ plan and they want a knee-jerk reaction, they want panic, they want fear, and they will use it against you and others who share your values. I have been warning you about this for a long time.

But understand this…this is another attack of the authoritarians, carried out by the radical leftists (i.e. Democrats), against our Constitutional Republic and a civil society. They are destroying the country one step at a time. They are planning more attacks, many more. Be prepared.