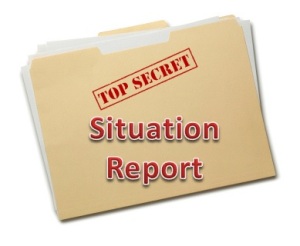 Here I go again…more spewing of opinion on what I see is happening. Lucky for you I am writing SitReps less than one a month.

Not a whole lot has changed since the last SitRep (6/16/2019), mostly the situation has just continued to decline and deepen.

I had a conversation yesterday with a friend I have had for over 40 years. She asked me how much more time we had left…specifically, would the country last another 5 – 10 years. Much to her disappointment I gave her my standard/stock (albeit, correct) answer.

We could last another 50 – 100 years, or we could collapse in the morning.

Yeah, I know…Why is she still my friend?

However, that is my standard answer and it hasn’t changed in the last 6 – 7 years…and probably won’t. Well, not until we get a “singularity” point, or some other event on a significant enough scale that will affect our standing as a country. And yes, we could wake up on any given morning have experienced one…and see that the country is crashing around us. For right now…we are just a slow train wreck…but a wreck all the same.

Okay, on with the SitRep…

Today I will cover three primary areas of concern:

In my post FAQ – 7/5/2019 I talked about the shrinking middle class…it is disappearing, and has been since 1970…at an alarming rate. Well, on 7/16 CNBC released an article that talked about the middle-class and how they have a very sour outlook on the economy and their future. And that attitude has taken a noticeable downturn in the last six months. In one report the middle-class rated their ability to achieve the American Dream at only a “C”. And what would your parents have said to you if you came home with only C’s on your report card?

Another related report they covered stated that half of the middle-class feared a major recession coming within a year. That

represents an increase of 10% in the last year alone. Their “feeling” was that we are due for a major recession…or worse. That’s HALF of them expect that!

And here was their response to prepare for that feared coming major recession:

So there you have it…middle-class folks fear a major recession is coming and want to prepare for it. They intend to do that preparation by going deeper into debt and reducing their ability to retire. Just how smart is that?

government is not allowed to exceed in their borrowing. It is designed to keep the President and Congress in-check as far as fiscal irresponsibility is concerned. In other words…when the President/Congress seeks to borrow money they are constrained by law (i.e. the debt ceiling). Once that debt ceiling is reached Congress has to approve an increase in the debt ceiling before the government can borrow more money to spend. And this President and Congress are out of fiscal control…and they just crossed a red line.

The whole reason for having Congress approve an increase in the debt ceiling is accountability and compliance with the law. When they go through the process of raising the debt ceiling for a specific dollar amount the President has to formally request it and Congress has to formally vote on it for approval. That gives the public full knowledge of what is happening and puts the responsibility/accountability on the President and Congress. Not a perfect system to be sure, but at least one that keeps us, US citizens, informed and allows us to use that information at the ballot box.

saddled with. They worked together (called bi-partisanship) to not just raise the debt ceiling…but to put no limits on how high the debt can be raised during that time. Yup! You read that right. Suspending the debt ceiling means there is no limitation on the amount of money that can be borrowed by the federal government. Yes sir…whatever they borrow during the period of the suspension simply gets added to the national debt without having been voted on, approved, identified, and without anyone being held accountable…and the public being is kept in the dark about it. Nice job Mr President and members of Congress!!

Oh, but not to worry…this isn’t the first time the devious “debt ceiling suspension” trick has been used against the American public…no sir. Most recently the President and Congress did the same thing in February of 2018. Yup, they did a one-year suspension of the debt ceiling just last year. Maybe that is why this President and this Congress have borrowed more money per year than any other President & Congress in the history of the country!

This President is averaging nearly 35% more annual borrowing than the previous President. Ah yes…how sweet…the art of the deal. And that deal making is financially and economically tanking us faster than at any other time in the history of the country. Isn’t it great to see Dems and Repubs, Congress and President, working together so well?!?!?!?!?!

Artificial Intelligence (AI). I hope you read it. Well, several cyber-security companies have recently released information concerning the use of DeepFake technology in the corporate world. Yeah, sooner or later it was going to happen.

So here is what is happening…a Chief Financial Officer (CFO) gets a call from the Chief Executive Officer (CEO) requesting an emergency money transfer. And yes…the “CEO” is a person impersonating the real CEO on the pone using DeepFake audio technology to sound exactly like the real CEO. With the help of AI, the DeepFake software has “learned” to sound just like the real CEO. And the amounts stolen through these money transfers are in the millions.

So you think the potential damage of what this technology could do would be limited…right? Wrong!

The potential damage that this technology can achieve in the corporate world is limitless. Imagine someone impersonating a CEO released an audio statement stating that their devices had been infiltrated by the Chinese and all the user’s personal and financial information was hijacked and it is now in the hands of the Chinese government. And, everyone was to immediately discontinue using their device and no “fixes” would be released, the company was declaring bankruptcy, and all the employees were not to come into work until further notice.

I watched a video of former President Obama calling President Trump a “dip st!t”…yes, you read that right…a video and in his own words Obama called him that name. How horrible!!! And worse…inciting.

Ah, only problem…it was a DeepFake video produced by Jordan Peel…and it was 100% DeepFake. Let me state clearly…I could not tell it was a fake. Be very, very cautious in the coming months about what you see and hear in the media.

About 10 days ago I read where they are now looking at making whole movies via DeepFake technology. Yup, entire movies with actors that we all know. Problem is…it won’t be the actors you are watching…it will be their DeepFake impersonations. Yeah, Imagine a young Sylvester Stallone playing the role of James Bond 007 with Michelle Obama as his Bond Girl. Yeah…yuck! But, it is coming!

Well, not entirely true…it is already here. There are already “remix” videos out there, but generally limited to only scenes, not entire movies. And the scenes look very good from what I’ve seen. Too good. So, it’s only limited to movies…no big deal…right?

Ah, what happens when those DeepFake videos become news releases from CEO’s…or worse…the President of the United States?

Can you imagine a video showing President Trump in the Situation Room secretly declaring war on Russia? And it shows him clearly telling his Generals, you can hear him plainly, that we will launch a full nuclear strike on Russia in an hour…and that video hits that Internet?

What other devious and dangerous ways could this DeepFake media technology endanger you, your family, our country?

Prepare yourselves for it…or not…and suffer the consequences if you don’t.

And where exactly do they expect to see that violence coming from? That is a key to pay attention to.

The answer is…political supporters of each party. Yup, these folks expect to see violence at the hands of political party supporters. No, there was no distinction of which party…both party’s supporters are expected to commit the violence. The respondents are claiming “politically charged rhetoric” will be the motivation to commit the violence. Do you doubt that? Yeah, I didn’t think so. Just look at the recent Twitter wars and rally speeches and media releases.

So…enjoy the two-party system, enjoy the tough talk, enjoy the call to action, enjoy the political rhetoric. And then be prepared to deal with the after-affects.

I am telling you point blank…”VIOLENCE” is the #1 threat/risk we face in emergencies, disasters, and certainly in grid-down…and now it’s coming to our daily life. Be prepared…or suffer. 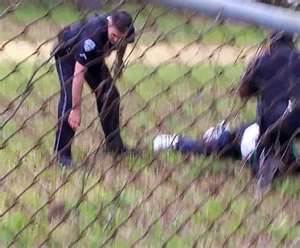 especially when they shoot and kill unarmed citizens…or choke them to death for no reason…or punch and kick them when they are handcuffed and they are petite handcuffed women and the cop is a huge 220lb musclehead, etc.

You also know that I make a big differentiation between LEOs (law enforcement officers) and Peace Officers. The names should be sufficient to understand the difference.

And that being said…you should not commit violence against either while they are doing their legal and lawful responsibilities…period!

Yesterday I saw several reports of NYPD offices getting buckets of water thrown on them. 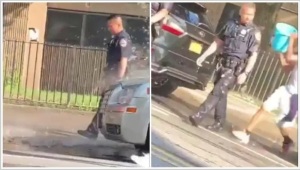 Yes, the officers were on duty. Yes, they were making arrests. And yes, bystanders threw buckets of water on them. And in one case threw a bucket at an officer and hit him in the head with it. That is totally unacceptable!

Because today it is buckets of water being thrown on them to show disrespect…what about tomorrow, or the next day, or next week, or next month?

To their credit the officers ignored the attacks and didn’t take the action that there were entitled to by law. After all…it is assault and battery on a police officer…even if it is a bucket of water. The officers showed amazing and admirable restraint.

This has potential disaster written all over if it becomes a fad or trend!

And here is an interesting side tidbit…did you notice that they were NYPD officers? And who is running New York City? Yeah, a radical communist/socialist mayor. Nuf said.

With everything that is happening in the country/world right now, the single most important thing you can do is be informed so you can be better prepared.

I can’t force you to be prepared, I can’t even force you to see what is happening, or to connect the dots…even if I lay it out plainly for you. What you see, believe, and do is completely and totally up to you. And that is as it should be. I don’t want to change that.

What I would like you to do is consider that you are seeing in the country/world today…then think it through…ponder it. Then I would like you to assess what are the threats/risks to your family. And then finally…what commonsense, reasonable, well-grounded, and balanced steps can you take to mitigate those threats and risks.

If you want to learn more about identifying risks and threats…and how to mitigate them <click here>.

But, please, I am begging you…do not ignore the warning signs that are all around us. Tough times are here, really tough times are coming. The threats and risks are real. And just as real are the ways to prepare to avoid them and/or the best ways to deal with them. It is all about keeping your family as safe as possible during bad times.