As you know I’ve been working on a series of highly portable, field going Ham radio boxes and the portable power boxes to juice them with. This article is branching off to renewing the power to keep your Ham radio outfit up and running far beyond simply a day or two. This article is about solar power. Specifically, I will share some information about solar power from a Glowtech60 foldable solar kit.

I have already covered solar power and the recharging of small batteries powering a small radio. I did a review of a SolPad7 and Nomad7 solar recharging kits for AA and AAA batteries as well as how those little solar pads can directly charge your Baofeng UV-5RA. Those batteries of course would be powering your Baofeng UV-5RA handheld radio. But that was all about small, now is time to look at larger radios, larger power needs, and larger solutions.

Going back to the original mission that started all of this was the need for radio communications capability in the field. That mission is outlined as…

“Compact and portable radio equipment providing the ability to communicate over standard radio frequencies among family and group members.”

Once the need was identified and a mission defined, then came the power to keep it going. Yes, the portable radio go box has a battery and I also wrote a very brief article about using a Nomad7 or Boulder30 solar kit to recharge that battery. But you know me…one is none, two is one, and three is a good start. The next logical step would be an auxiliary power source to keep the radio operational for a longer period of time. That means a larger battery. Since the space is limited in the radio box, that means a box that holds that larger auxiliary battery.

OK, now we are getting somewhere. That lead to my design of the auxiliary power box. It more than tripled the overall amount of time that the radio would stay operational.

But, as I mentioned in the beginning of the article, it all ties together to form an integrated “system.”

Here are the system’s parts:

It is way easier to stay on the same page while explaining this system to you if I show you the pictures as we go. So here is the first picture…

This is the portable Ham-In-The-Box that I built for emergencies, disasters, and grid-down. The unit is wholly self-contained, including its own 14Ah rechargeable AGM battery. The radio itself will shut down at about 10vDC protecting the battery from becoming completely discharged. The next step was to build a portable power box to give the radio more operational time. The radio box is not designed to be operated sealed up. Duh! You gotta be able to access the radio. So no need to get fancy with “through-the-box” connections.

Part of the “guts” of the radio box build was a Powerwerx Red-Dee-2 4-way connector. I wanted flexibility to plug-in what I wanted and needed. The connector handles the radio, the voltage meter, and the battery. That leaves a connection open…and therein is the flexibility that I will show you.

The portable radio box is completely stand alone from an operational perspective. Open the box, connect the antenna, and plug the battery into the power distribution gadget. Then just turn on the radio and you are ready to go to work. 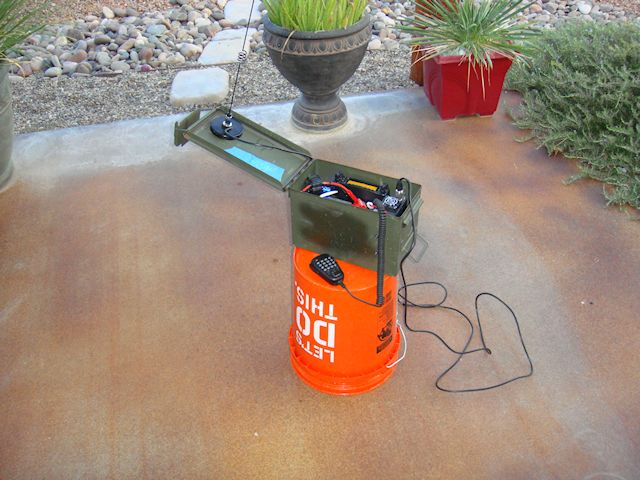 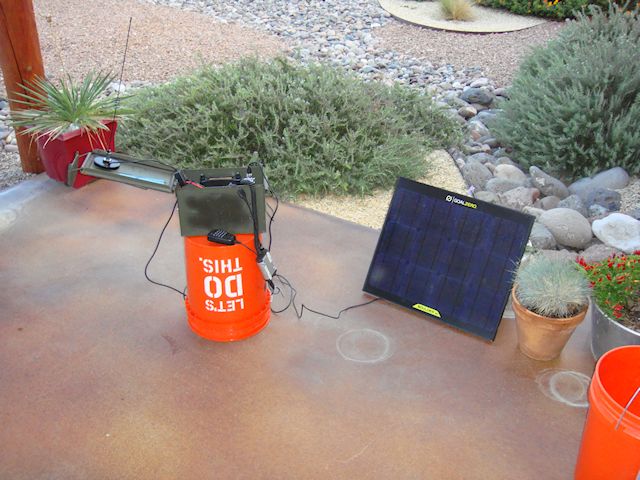 We now have the stand-alone portable radio box up and running, plus a charging system in-place to keep it running. But we are somewhat limited in the amount of time that the radio can be operational. That operational time is directly related to the depth of charge, power reserve, which the small-ish internal battery has. That leaves us with the task of increasing the operational time, meaning that we need a larger battery, which then also means we need more charging capability. And that means the “portable power box.”

So the next picture shows that system hooked into the portable radio box. Notice the power cable connecting the two boxes? It is still just 10guage wire but it is heavily insulated by a durable cover that is resistant to the effects of the outdoors. It is a great choice in areas whose environment will not be kind to your equipment while ensuring it get the most power from the battery to the portable radio. Yes, it has Anderson Powerpoles on each end to ensure it connects to all my radio and power equipment.

This power box has a 35Ah rechargeable AGM battery. To protect the battery from over discharge it also has a built in Low Voltage Disconnect. Notice the power box can be completely sealed up and cables can be plugged in from the external Anderson Powerpole chassis mount.

The GoalZero Boulder30 with Guardian charge controller is now charging the power box’s 35Ah battery in the power box. However, since I have a second GoalZero Boulder30 system I can now hook up that additional system directly to the radio box rechargeable battery. Since the battery is not being used to power the radio it will come back up to full charge rather quickly given adequate sun. 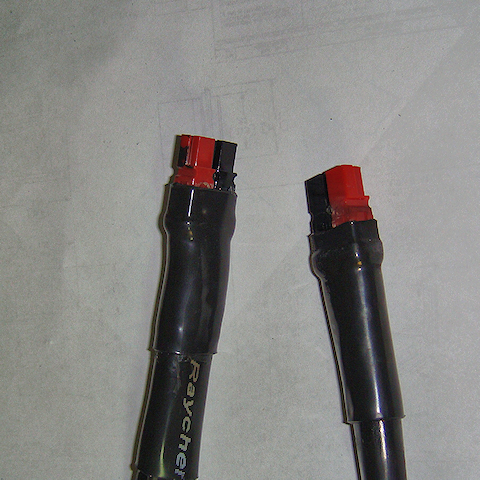 Why is that important? Because you never know when you might have to “run” and you might have to leave some equipment behind due to time constraints. By keeping the portable radio box’s battery fully charged you know you will have several hours of radio operating time even if you had to leave the portable power box and solar kits behind.

But don’t worry about connecting all the solar kits and the boxes, just follow this guide:

And there is one last benefit from using the Glowtech60 system to charge the power box…I freed up the second GoalZero Boulder30 panel and charge controller. I can use it to daisy chain to the radio battery giving it 60w total charging capability. Or, I can use the second Boulder30 on another battery that is in need of charging.

You may choose to have a system that you have designed, or maybe someone else’s design. But I hope this article has given you plenty to think about and put a thought or two into your head concerning what solar/power/battery capability and options are right for your needs.

Remember, communications is one of the primary faults that exists in virtually any disastrous incident where people are injured or killed while working in emergency and disaster situations. You have the power to overcome all, or at least part, of those communications issues rather simply and cost effectively should you so choose. I hope you  choose to.