This post is Part #3 of a multi-part SitRep. The original SitRep (part #1) appeared day before yesterday, SitRep (part #2) appeared yesterday. For this post to make any sense I would strongly encourage you to read Part #1 & Part #2 in order.

Tomorrow will be Part #4

This one will stir the hornets’ nest a whole bunch!

For those of us that are old enough…we remember the Vietnam War. Some of us even served during that war. We remember very well that the military fell out of vogue to a very, very low point in the 1970’s. It was tough for us to be in the military during those times. While I was

never called a “baby killer” or spit on…many of my fellow veterans were…maybe even you.

Now fast forward…today we revere the military…especially those individuals who have served more so than the military “establishment”. But I ask “Why?”

Since the 1860’s let’s review the facts…Dismissing the 45 or so wars and/or military conflicts the US was involved in before the late 1860’s, there are the following –

That’s 46 fairly major military engagements for the US military in the last 160 years. That’s almost a war every 3 years. And it includes two major world wars…and many wars that included multiple countries from around the world. And many of the listed wars overlapped each other with the US involved in multiple concurrent wars.

And 2/3 of those wars occurred since the first socialist US President (FDR) in the 1930’s.

And the majority of those wars were started/initiated by the US…and most of those by the USA invading a sovereign foreign country.

And what do we have to show for all that war activity? Nearly two million dead US military personnel…and trillions upon trillions of dollars poured into the pockets of the military-industrial complex. So I beg the question…was it worth it? Seriously…was it worth all that war?

In addition to that question let me ask another; did we win the war in Afghanistan? How about the Iraq War of the early 2000’s? Did we win the Vietnam or Korean wars?

Let me revert to our WWII victory over Germany and Japan…we unquestionably won that war. And for good reason! It had to be won! And the world is far better off without the Nazis running it.

And now let me go back to Iraq and Afghanistan…Are they better off now than before we went to war against them? Is the world better off?

Well, lets’ look at Iraq…we bombed them back to the Stone Age…and their country looks like it. While obliterating that country the US military killed about 250,000 Iraq civilians (exact number is unknown, possibly as high as 500,000) while US military suffered less than 5,000 military personnel killed but another 30,000+ injured US personnel. And all for what? Tell me…for what!?! What was gained? Even do a cost-benefit analysis…was it worth all that death and destruction?

In Afghanistan the numbers are estimated to be well over 300,000 Afghans killed since we started a war with them 20 years ago. US military deaths are about 2,500 and another 21,000 wounded. And they were already in the Stone Age…we just bombed them deeper into it.

So was either sh*thole country worth the war with them?

But, where did all those trillions go? Granted some went to the men and women of the military who served there in the form of salary and benefits. But, the vast, vast majority of it when to who???? Yup, the military-industrial complex that supplied all those bullets, bombs, and “services”.

Now, here is the tough question…What do we, the United States of America, have to show for 7,500 military personnel dead and another 51,000 wounded…and $22trillion spent? Seriously, what example can we hold up and be proud of!?! Tell me!!!

Let me digress for a minute before I make my final two points in this section. We won our

independence from an oppressive British tyranny through a war. We had to beat them again in a war about 20 years later. So our country is founded in blood, death, and war. But, in my opinion it was well worth it. We came away with the first Constitutional Republic and a Constitution that guarantees rights and freedoms.

Since 1950 (the last 70 years) what war was “worth it” anywhere near to that bench mark of the American Revolution? What did we gain?

So now I ask another tough question…Is the United States a war-mongering country?

I propose that the facts clearly show we are a war-mongering country. No matter how we justify it…the US likes to be in wars and other military conflicts around the world…the facts show that to be absolutely true. You cannot deny the facts.

America has a long history of honoring military personnel. One of those people some folks tend to revere is General Sherman of the Civil War. But, is he deserving of anything but a war crimes court? Sherman graduated from the United States Military West Point Academy that we have cherished throughout American history. Sherman looks to be a model example of the US military. And he was a winning Union General, right? Pretty good résumé…right?

In September 1864 Atlanta was abandoned by Confederate soldiers leaving only civilians. But Sherman had his 40,000

US Army military soldiers burn it to the ground…along with killing most every civilian in sight that was left in the city. The women even had to endure days of rape before some met their deaths. It is well-documented that his men, as they looked over the scene later, shouted over and over “Glory, glory, hallelujah!”

Then Sherman proceeded to “March to the Sea”…with nearly 70,000 US military troops. They made a swath

on US soil 65 miles wide 285 miles long where everything was destroyed…completely laid waste. Sherman himself said he wanted to “Make Georgia Howl” In other words…make the people scream in pain before death and destruction occurred to everything they couldn’t steal and send back to Washington D.C..

In addition to the $2billion in property that was stolen or destroyed, thousands of US citizens were killed. There are no accurate estimates that I could find but they ranged up to 100,000 rapes of civilian southerners and thousands killed during his military campaign against civilians. Sherman even ordered that if any suspected explosive mines were found on roads…well, they were to be tested by a wagon load of prisoners…women, children, or men.

And to ensure that his legacy survived the coming decades…much of the farm land was sowed with salt to ensure that crops could not be grown on the land.

Sherman had defined the concept of “total war” that is still used to this day…kill and destroy anything and everything of the enemy. Sherman…US military hero…or war criminal? All the same…he was a US Army General.

So my point is…we, as Americans, virtually idolize the US military. And now I ask…Why? Why do we revere the military so much? Does it come down to worshiping idols?

Obviously there are many outstanding personnel in the military who have done some amazing feats of mercy, self-sacrifice, and heroism. But, why do we idolize the US military? What has the US military actually, truly done in the last 76 years to keep America free?

And oh…free from what exactly?

And please don’t generalize…”Free from our enemies!” or stoop into the depths of stupidity by proposing “Free from Communism!” Neither of those were ever a military threat to the US homeland. Well, except that Communists have taken over the Democratic Party and currently occupy the White House and much of Congress.

Now, my point is not to demonize all our military personnel or criminalize all military operations. I am asking the question…or making the point…the US is a war mongering people…the facts, absolute facts prove it to be so. Otherwise why would we have engaged in hundreds of wars and armed conflicts, including massacres of US civilians, in the 240 year history of our country.

But I ask…To what end?

Money and power is the obvious and accurate answer to that question. And along with that…the occasional good deed such as stopping the holocaust of WWII. And where does 90% of that money and power end up? In the hands of the military-industrial complex and the politicians of both parties.

Outgoing President Eisenhower in a 1961 speech warned about “the immense military establishment” that had joined with “a large arms industry.” Eisenhower said,

“In the councils of government, we must guard against the acquisition of unwarranted influence, whether sought or unsought, by the military-industrial complex. The potential for the disastrous rise of misplaced power exists, and will persist.”

Eisenhower who led us to a WWII victory in Europe also spoke as someone who had seen the horror and lingering sadness of war, saying that “we must learn how to compose differences not with arms, but with intellect and decent purpose.” 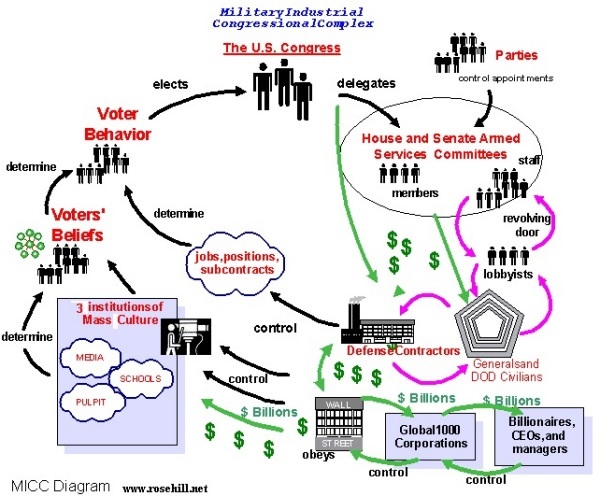 For the last 70 years the military-industrial complex, along with others, have ruled the United States political system, our country’s people, and the purposes of the US government.

The Constitutional Republic fell, or was bought, a long time ago for profit.

To understand this view of war, the military-industrial complex, and how it plays into this SitRep…you have to read the upcoming “Summary”.